“She’s one of the greatest Gaelic singers that have come on the scene”
– Mike Harding, BBC Radio 2 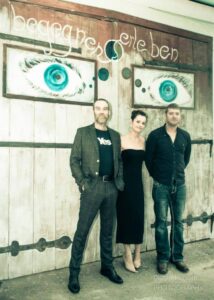 Since the award-winning success of her 2007 debut album, “Don’t Sing Lovesongs”, Maeve Mackinnon has proved herself one of the most distinctively gifted artists on today’s UK folk scene; a reputation cemented with the release of her second album in 2012, “Once Upon an Olive Branch”. The trio have toured widely in the last several years, selling out venues in Canada, Austria, Switzerland and Italy among other places.
Joining Maeve on piano and accordian is Brian McAlpine. In addition to his work with Scottish supergroup Session A9, Brian has been much in demand working with high profile acts such as Deacon Blue.
World-class guitarist Ross Martin completes the trio. A quarter of West coast supergroup, “Dàimh”, he is an instrumentalist of considerable depth and talent. A man in demand, Ross has toured with the very best in the Scottish and Irish music, including Karan Casey, Buille, Dual and Harem Scarem.
Described as “delicate, intricate and inspired musicianship”, Maeve Mackinnon’s trio breathes new life into songs old and new, and showcases live music at its best.